Upon first opening the link to Matthew Parker’s latest album, Greatest Hits!, on Spotify, I had no idea what to expect. My first thoughts were that this was probably a solo artist, with a stripped down sound, possibly very acoustic-centric. Then the album art caught my eye – the image of a guy with a backwards cap on, eating a peach that is arguably accompanied with an orgasm with every bite. Then I hit play on the first track “P.L.U.R.” and I learn that everything you might guess about what this record contains is probably untrue.

Greatest Hits! is surprisingly stunning in its execution – its absolutely beautiful arrangements, with an emphasis on keys and guitars, is somehow accompanied by lyrics that are fun and don’t seem to take themselves too serious. Not only does it make listening to the record from beginning to end a trip, but also something that is sure to put a smile on your face.

The album opens with an instrumental reminiscent of Pink Floyd, which immediately hooked me in, followed by what might be my favorite track from the record, “Tony Hawk”. The song seems to be about a grown man that can’t seem to grow out of ‘the good old days’ of playing Tony Hawk’s Pro Skater and smoking weed with the boys. The song hit me right in the nostalgia gut and immediately made me smile from ear to ear, and eventually laugh at the end. And the music video makes you love the song even better. 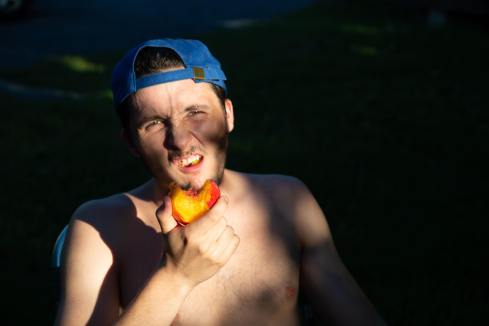 Then there are tracks such as “Instagram Famous” that pokes a bit of fun at our generations faux internet fame, and the song “All Is Fine” that swells and crashes instrumentally like a tidal wave. This continues as something of a common theme through out the record – while each songs tackles a different subject lyrically, while jumping around and shamelessly experimenting a bit genre wise, you leave the record having had as much listening to it as Matthew Parker seemed to have making it.

My first impression of the album was “if Flight of the Concords had a baby with the Beatles, you would have Matthew Parker”, and I would absolutely love to see these songs played live some day.

Inspired by and for fans of the Beatles, the Beach Boys, Steely Dan, and Louis Cole. Greatest Hits! can be heard on Parker’s Bandcamp and Spotify pages, and even more music can be found on Soundcloud. Also tune into Parker’s Youtube channel for more music and videos.